Ecologists often run into a scenario where their response data have more zeros than expected if the process generating their data was purely from a standard probability distribution. For example, there might be more zeros than you’d expect from a negative binomial distribution with a given mean. Two common methods for dealing with zero-inflated data are:

So, zero-inflation models separate the zeros into “true” and “extra” categories.

Zero-inflation models may be more elegant and informative if the same predictors are thought to contribute to the extra and real zeros.

Hurdle models can be useful in that they allow you to model the zeros and non-zeros with different predictors or different roles of the same predictors. Maybe one process leads to the zero/non-zero data and another leads to the non-zero magnitude.

Sometimes ecologists end up with a response dataset that is positive and continuous but has zero inflation. (Technically, any number of zeros is “zero inflation” for probability distributions that only represent non-zero positive values.) There are probably many scenarios that can result in this kind of data. Sometimes the “zeros” may not really be zeros but just really small values that weren’t measured. But there are also plausible scenarios where the zeros are real. For example, if the response variable is biomass at a given site, it’s possible there were just no individuals at some sites. If you want to model the biomass with a distribution such as the log-normal or Gamma, these distributions don’t allow for zero values. One solution is to model the zeros separately from the non-zeros in a binomial-Gamma hurdle model.

This post illustrates a small simulated example of one of these hurdle models where we estimate an intercept only. I describe how to fit the model, interpret the coefficients, and generate predictions with confidence intervals.

Note that the methods as illustrated here don’t apply exactly to count-based hurdle models since count-based models require a truncated count distribution. I.e., they need to account for the fact that the negative binomial or Poisson distribution can represent zeros too, but these zeros were already accounted for in the binomial model. Since the Gamma distribution can not represent zero values we don’t need to worry about that. Count hurdle models can be fitted with the packages mentioned above.

We’ll start by simulating some data and plotting it. First we’ll simulate a binomial process (0 or 1) with a probability of a non-zero value (1) of 0.7. Then we’ll simulate a Gamma process with a shape (mean) of 0.4. 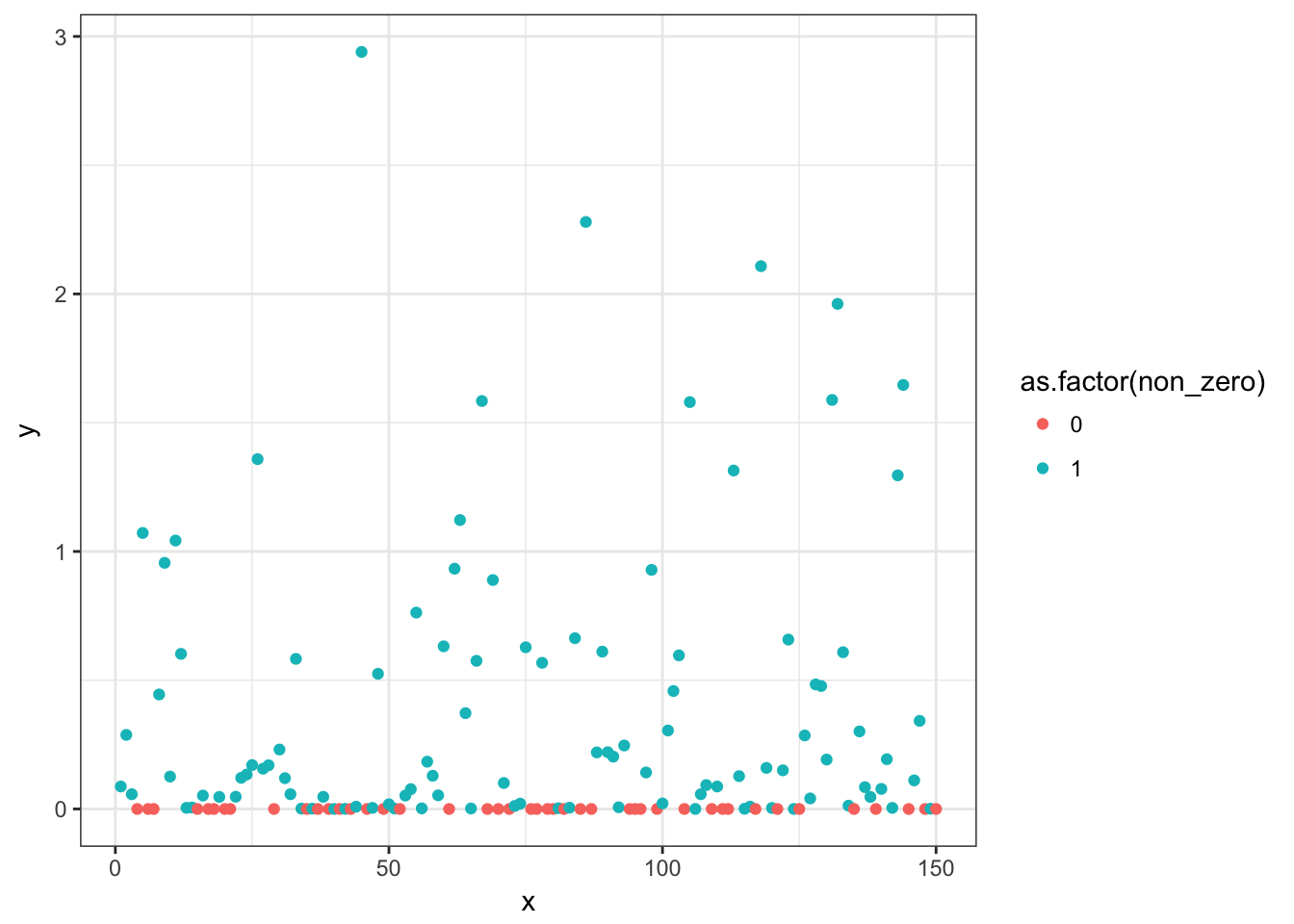 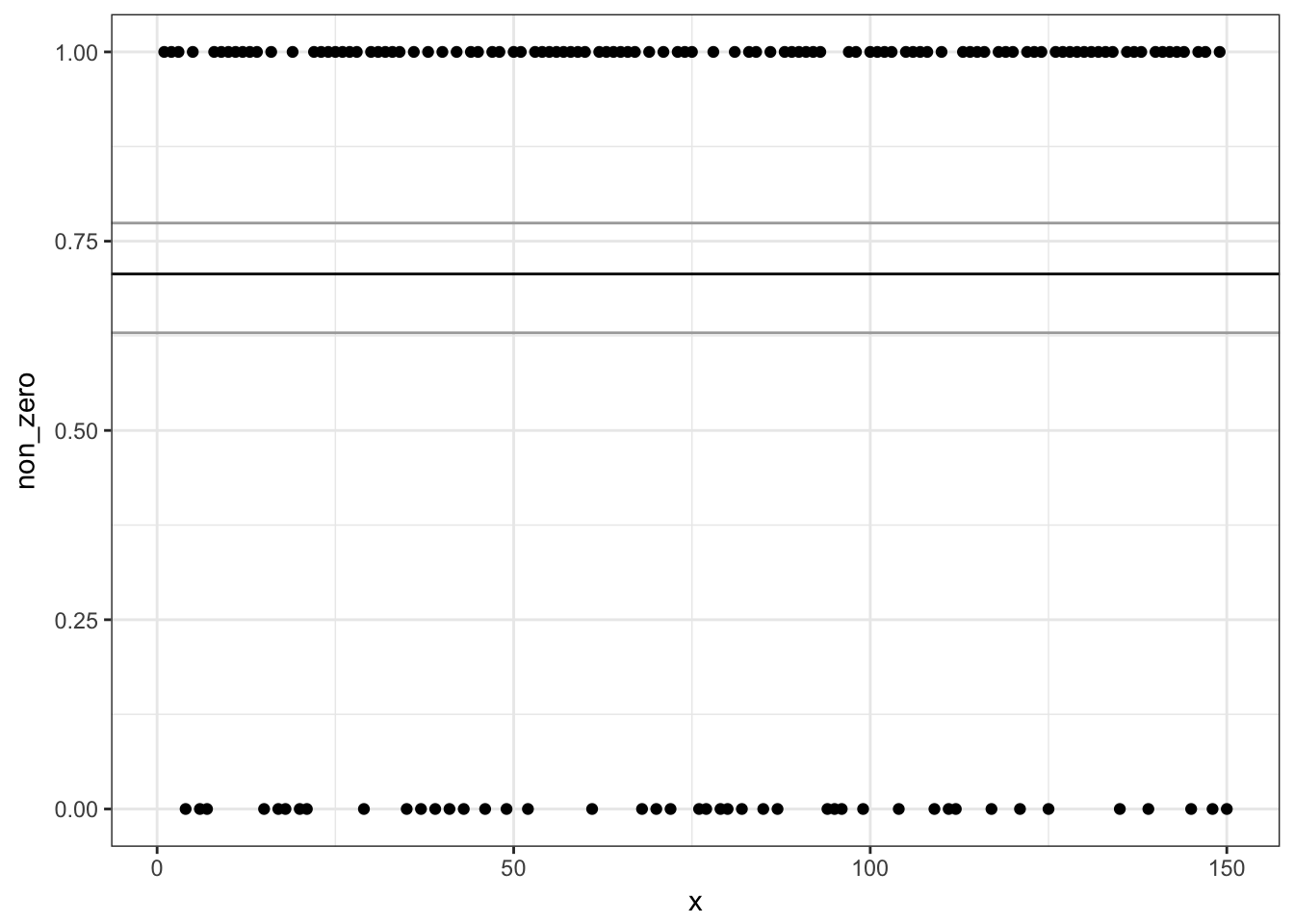 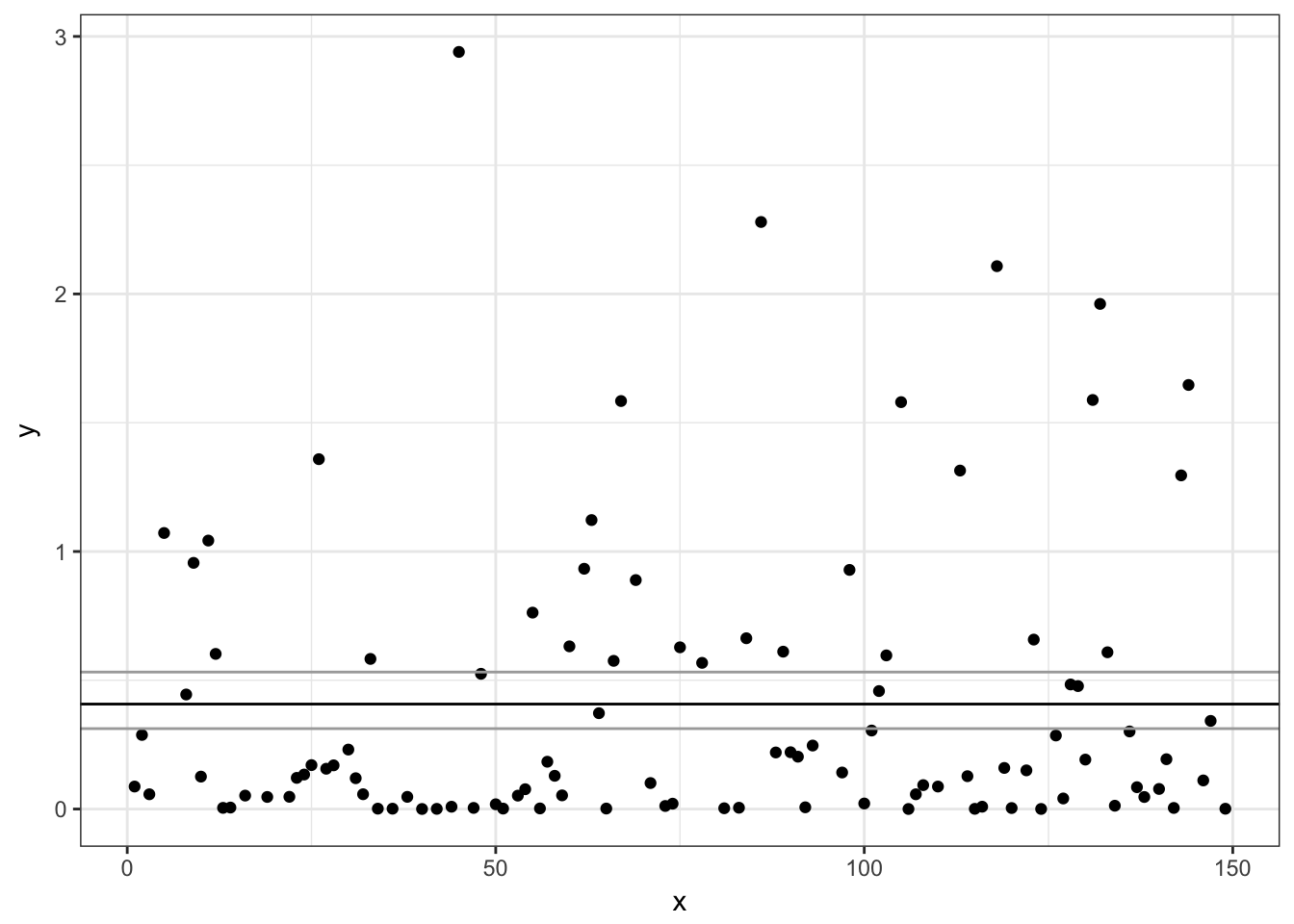 We can also check the predictions incorporating both the binomial and Gamma models. To do that, we take the two means, add them on a log scale and re-exponentiate them. We can check that the predicted mean (intercept) matches the arithmetic mean. 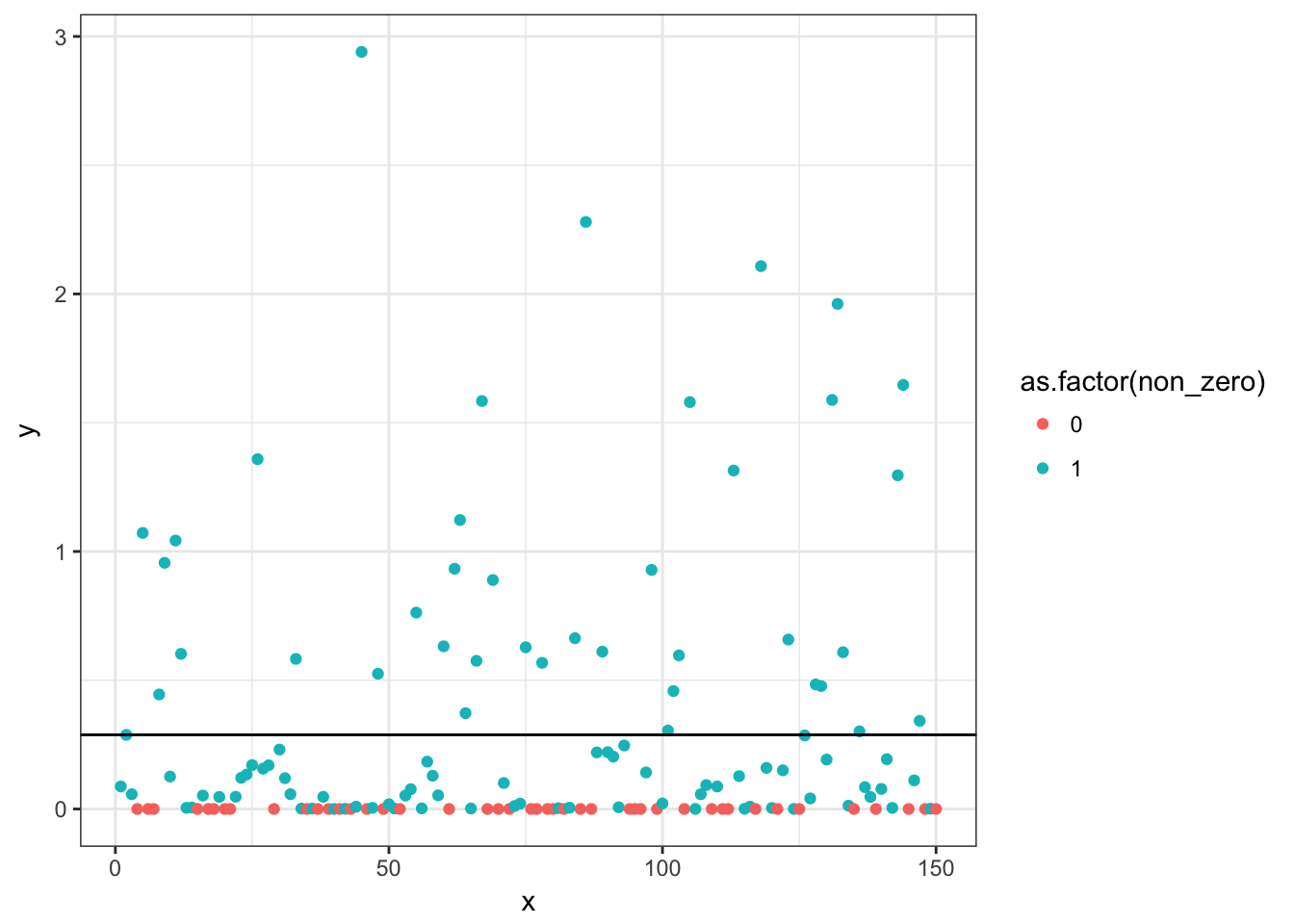 Let’s derive confidence intervals on our predictions. One way to do that is using a non-parametric bootstrap method. To do that we’ll define a little function that carries out our hurdle model as above. boot requires that the function’s first argument be the data and the second argument be a vector of row indices for each bootstrap replicate. The function should return the statistic we want to bootstrap (here the prediction).

We’ll run 500 replicates. In a real analysis you’d want to make sure you’d run enough replicates that the estimates had stabilized. You could test this by increasing the number of replicates until you start getting the same confidence intervals (to whatever level of precision you are interested in) regardless of whether you add more replicates. 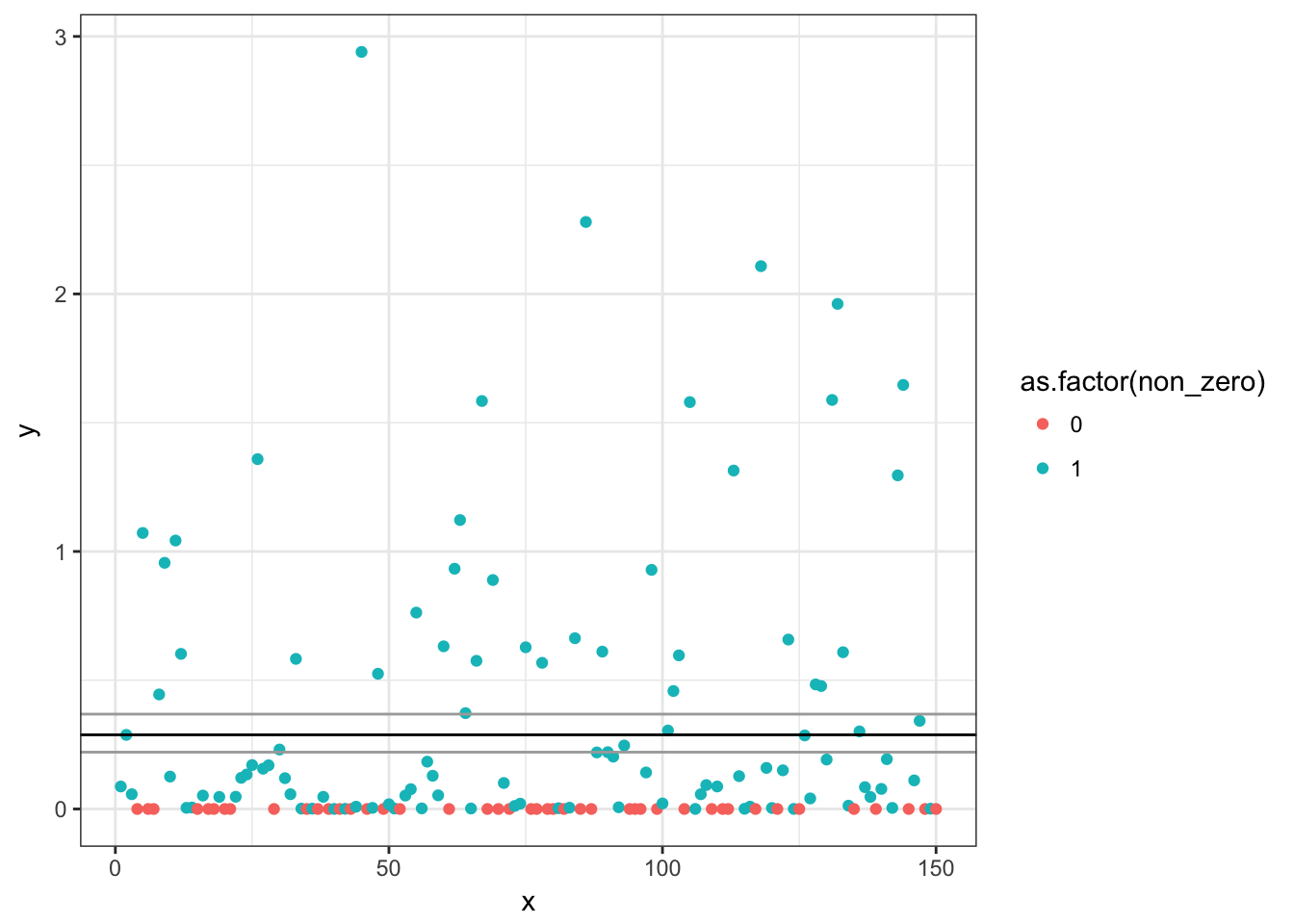